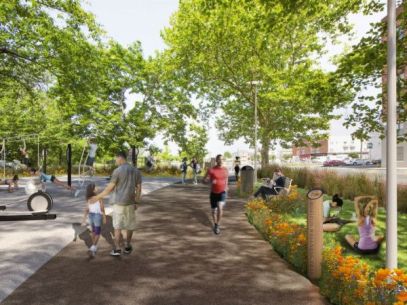 Newark’s Riverfront Park will have a boardwalk, walkway system, a fitness zone, an overlook with seating and a bikeway, officials say.

via Patch – Newark will soon have an $8 million park expansion near the Passaic River waterfront.

State and local officials gathered for a groundbreaking ceremony last week to announce the start of the third phase of the “Riverfront Park” project, an ambitious initiative to “reconnect residents to the Passaic River through the creation of green space and recreational opportunities,” according to a news release from the New Jersey Department of Environmental Protection.

The announcement marks the beginning of the third phase of the park’s development, which entails two stretches of riverfront land that will be developed with a boardwalk, walkway system, a fitness zone, an overlook with seating, a bikeway, space for open-air events and a gateway to the downtown area, DEP officials stated.

A walkway will also be constructed under the Jackson Street Bridge, allowing safe pedestrian crossing between the Ironbound section of Newark and downtown, officials said.