Rose Duger at NJ.com reports on the state of development in Harrison and Kearny.

For newlyweds Noorin Hamid and Zain Naqvi, convenience was key when choosing their first apartment. 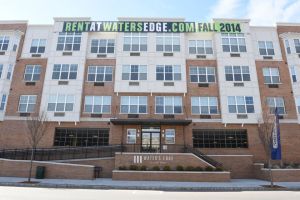 Married in January, the Monmouth County couple moved a month later to Water’s Edge, a new 141-unit apartment complex in Harrison. The combination of new construction and proximity to the Harrison PATH station sealed the deal for the couple, who work in Manhattan.

“We both work in the city, so Water’s Edge made sense for us,” said Hamid. “The shorter commute gives us more time together and we both love the layout of the apartment. It’s a good size for two people and it feels very comfortable, so overall, it is a good living situation for us.”

Apparently, others agree. Water’s Edge, which was constructed by Livingston-based BNE Real Estate Group and opened in September, is already 85 percent occupied, as of late March. Monthly rents for the studio, one- and two-bedroom apartments start at $1,600.

“Harrison is undergoing a tremendous renaissance and we are thrilled to be a part of it,” said Jonathan Schwartz, senior vice president of BNE Real Estate Group. “Water’s Edge reflects our commitment to creating innovative, well-thought out residences in strategic locations near mass transportation that meet the needs of today’s sophisticated renter.”

Another project nearing completion, Harrison Station, is located adjacent to the PATH station. The third phase of the mixed use development will include 329 residences and 8,700 square feet of retail. Two earlier phases included an Element Hotel, which opened in August, along with 275 rental units and 12,184 square feet of retail space that opened in 2011. Construction should be completed by October, according to George Cahn, president of Cahn Communications and a spokesman for Ironstate Holdings and The Pegasus Group, the two firms building the project.

Also in Harrison, construction of Vermella Harrison is nearly complete, with the first 100 apartments slated for occupancy by the end of the summer, according to Lisa Kaplan, director of marketing for Carlstadt-based Russo Development. Located adjacent to Red Bull Arena and the Harrison PATH station, the complex will feature 402 rental units, as well as 15,000 square feet of retail space.